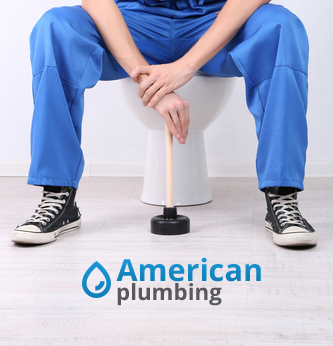 One of the most commonly encountered plumbing issues is the clogging of a toilet. Inconvenient, embarrassing, and potentially expensive, clogged toilets are completely avoidable. There a number of factors that dictate how and why a toilet will become clogged, such as water pressure and pipe integrity. By avoiding the primary causes of these blockages, you greatly reduce the risk of a costly bathroom repair. American Plumbing is proud to share our decades-worth of professional plumbing advice to help keep your bathroom’s plumbing running smoothly.

The most prevalent cause of a clogged toilet is, of course, toilet paper. While designed to disintegrate in the water for easier movement through your plumbing system, too much toilet paper or improper use can lead to costly blocking. If you’re someone who tends to use larger quantities of toilet paper, then it may be a wise idea to flush the waste before using and subsequently flushing the paper. Also, by folding your paper instead of rolling it into a ball, you greatly reduce your chance of a clog. The tightly bound balls of paper are sometimes too large to fit through the plumbing. However, if you should experience a clog, the best thing to do is immediately attempt to dislodge the blockage with a plunger. Again,excess toilet  paper is the most common source of blockage, so a plunger will usually do the trick with minimal effort. However, for more significant clogs, a plumbing snake may be necessary to dislodge it. Similarly, feminine hygiene products are also a common cause of toilet blockage. They are designed to absorb moisture, causing them to expand within the pipes. Furthermore, many pads contain non degradable plastic that will not dissolve, not to mention their sheer size being an issue for most drains.

Another impediment for your drains is deceptively common: hair. Believe it or not, large deposits of human or animal hair can cause clogs among those who have the habit of emptying their hair brushes into the toilet. If this sounds like yourself, it’s probably time to rethink your cleaning strategy if you want to avoid what could be a costly and inconvenient repair. In order for the hair to be removed, a plumbing snake or powerful chemical solution will usually be required under the supervision of a professional plumber. Similarly, sometimes random objects find their way into the toilet and cause damage. For example, if a toothbrush somehow falls into the toilet, it may not pass as easily as its appearance may suggest. If these objects are not snaked out sooner than later, waste and paper can accumulate and clog your toilet extensively. Obstructions becoming stuck during flushing isn’t the only cause of toilet clogging. Occasionally hard water buildup can accumulate over time and also cause blockage. Sometimes the toilet itself is the issue – many modern toilets utilize low-flow technology to great effect, but the earlier models were prone to clogs. If this is the case with your unit, then it may indicate that the lifespan of your toilet has come to an end. On the other hand, it may be the drain line causing the clog instead of the toilet itself. Again, this will usually require a plumbing snake or acidic solution such as lye.

The best way to avoid the hassle and expenses of a clogged toilet repair is to avoid clogging your toilet in the first place. Accidents happen, but these can usually be prevented with common sense. Be sure to keep foreign objects from hovering too close to bowl of the toilet, lest the somehow fall in and become stuck. Also if you have small children, be sure to keep the lid closed – it is not uncommon for a curious child to introduce a foreign object into the drain. The simplest way to avoid a clog situation is to routinely clean your toilet – regular maintenance, even cosmetic, will greatly reduce the chances of your toilet experiencing a problem. However, if you do find yourself in the unfortunate situation of a clogged toilet, just give American Plumbing a call. We’ll know just what to do!

How Plumbing Leaks Are Detected And Repaired

Plumbing leaks are one of the most frustrating issues property owners may encounter. Even a small leak can lead to expensive costs in the form of...

The weather isn’t too hot, it isn’t too cold. There is a slight breeze in the air. You have a glass of wine in your hand and your swimsuit on...

American Plumbing has been offering professional and competitively priced plumbing repairs and services for over 40 years. Our company has been...

Hot water heaters are the unseen matriarchs of in home comfort. When was the last time you thought about your water heater? Most people don’t...

17 hours ago by Skyler Libkie 0

6 days ago by Skyler Libkie 0

11 days ago by Skyler Libkie 1

17 days ago by Skyler Libkie 1